A question that has repeatedly come up here at the Archives is 'where was the College located when it was in Plainfield?' (For those who don't already know, the College was organized in 1861 as Plainfield College. We moved to Naperville in 1870 as North-Western College). The Sharon Evangelical Church was instrumental in the choice of location by donating land and building/money for the College and thanks to their timeline on the website, we gathered enough information to track it down more specifically.

With the online Sanborn map from 1893 in hand, my student assistants Adam and Brittany and I all headed to Plainfield this past Friday for a research trip - to investigate what is there currently and take some photos. Turns out the Plainfield Academy on Lockport at Dillman is currently on the land originally used by the College.

United Methodist Church where we found an excellent photo on display showing exactly where the replacement building (the original College building was destroyed by fire in the early 1870s and rebuilt by Plainfield citizens as a public school) was located. The church is in the center of the photo and the old school building is in the upper right corner.
Posted by Kim at 8:01 AM 1 comment: 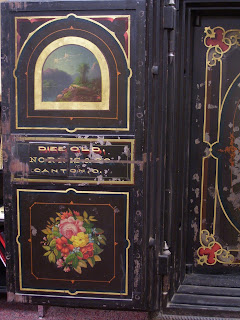 Sorry - it's been a long while. Busy, busy and not much to say, I guess. Thanks to two history students prodding me, I've finally uncovered the story on the safe! (It's no longer a summer research project!). Thanks to Diebold company's 150th anniversary website (2009), the answer was easily found. According to their information, the company moved to Canton, Ohio and was named Diebold, Norris, and Co from 1874-1876. I finally had a manageable date to work from! Prior to this, I only knew it was purchased between 1864 and 1926 since the name on the safe was North-Western College.

I checked our newly transferred financial records from that time period and after skimming through everything from those years, found an entry in August 1876 for $200 for the purchase of a "new office safe". Since no more details than that are available, I'm making the leap that that is the one and same office safe that now lives in the archives reference room.
Posted by Kim at 2:51 PM 1 comment: 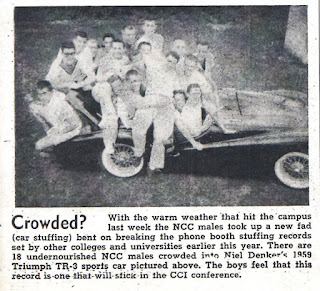 I ran across this fun picture in the online Chronicle from May 1959 and thought I'd share. I have no idea what the story is with it, but the picture made me smile.
Posted by Kim at 9:04 AM No comments: